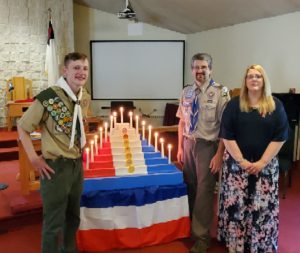 Becoming an Eagle Scout is the highest achievement in the Boys Scouts of America, a feat only a small percentage of all Scouts attain. Schuylerville High School senior Logan Bruno not only became an Eagle Scout, but completed an extensive, in-person service project amidst an ongoing pandemic when everything was largely virtual.

The project, titled the Arnold Bruno Memorial Save a Life Program, was in memory of Logan Bruno’s grandfather, who helped found the Wilton Emergency Squad.

“An Eagle Scout is something my dad became and something that my grandfather almost became, but got drafted into the Vietnam War. It’s good to keep that family tradition going,” said Bruno with a smile.

In order to earn his Eagle Scout, Bruno had to plan, organize, lead and manage all aspects of the project. 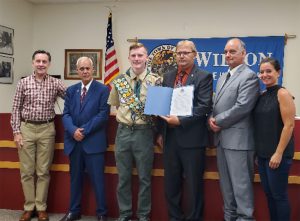 Bruno got to work on his service project in 2019, and got it approved in 2020. He then began his quest to secure funding and donations from local businesses. When the pandemic began, a lot of Bruno’s outreach turned virtual, but he still ended up raising $7,000. The Save a Life Program offered free CPR and AED certification courses at Wilton EMS over a period of 10 months, certifying more than 60 people in the community.

“It was very rewarding to be able to do that much in such a short amount of time,” said Bruno.

Bruno said he’s thankful for the support of his Scout Troop 4024, as well as Wilton EMS who donated all of the equipment used during the courses; the money Bruno raised went to paying for the CPR/AED certification cards for all participants.

In May of 2022, Bruno was officially awarded his Eagle Scout, accompanied by a flag that was flown above the Capitol Building.

“Becoming an Eagle Scout definitely teaches you to push yourself outside your comfort zone,” said Bruno. “It’s a very stressful and difficult task to get through, but it teaches you essential skills including positivity and leadership. Those are core things to learn in life.”