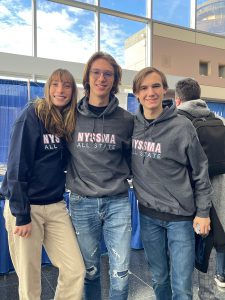 Shock, awe, and pride. Those are the three words Schuylerville High School seniors used to describe their feelings when they found out they were selected to perform in the NYSSMA All-State Mixed Chorus. On Dec. 4, Christopher Buettner, Ian Bailey, and Elliott Woods performed with more than 200 singers from across the state at Kodak Hall at Eastman Theatre in Rochester.

“Performing at All-State has been in the back of my mind for years,” said Buettner. “To be able to go is like a final sendoff from my Schuylerville music education.”

Last spring, 6,000 sophomore and juniors from across the state performed vocal solos for evaluation in hope of qualifying for the prestigious ensemble. Of the 6,000 soloists, 2,400 scored high enough to be recommended for the All-State Choir. Buettner, Bailey, and Woods all scored 100 on their NYSSMA solo evaluations, earning them spots in this year’s All-State performing group.

“I never expected this to happen,” said Bailey. “When I got a 100, I had the realization that I could go to All-State.”

“I feel like I’ve been working up to this point since I started getting into music,” added Woods. “It was a shock to find out I got 100.”

The trio of singers, all close friends, developed their love of music early on, spending the past six years being guided by music teacher Jodi Ogburn.

“I have had the privilege of working with these students since they were in sixth grade,” said Ogburn. “I’ve watched them grow into really amazing musicians and people.”

During the All-State concert, Woods and two singers from other schools performed a trio at the beginning of the last song of the concert, titled “Give Me Just A Little More Time”. 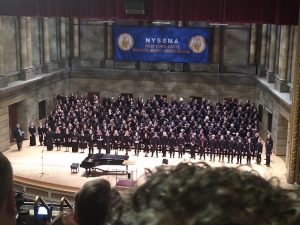 “Years of NYSMMA and All-County really prepared me for this,” said Woods. “Over the years, the school’s music program has strengthened so much and I’m so grateful to represent that.”

“These students have worked really hard in so many ways and taken advantage of all the opportunities we have offered at Schuylerville,” said Ogburn. “I am incredibly proud of them.”