A memorial rock honoring the life and service of longtime Schuylerville CSD Board of Education member Mike Booth was unveiled Sept. 3 outside of Black Horse Stadium.

Mr. Booth was a board member for 18 years and passed away in 2019 from pancreatic cancer. During his tenure, he was a champion for students, and was known for his passion, advocacy and pride for the district.

Booth graduated from Schuylerville Central School District in 1981 and immediately entered the Air Force, where he served with distinction for four years in the military’s law enforcement division. He was elected to Schuylerville’s Board of Education in 2001, serving 18 years on the Board, including six years as president and two years as vice president. As the owner of Booth Oil Company, he shared his knowledge and insights on budgeting with his fellow board members, while prioritizing opportunities for students and advocating for long-standing Schuylerville traditions, such as the sixth grade Camp Chingachgook trip. Booth passed away in September 2019 after being diagnosed with pancreatic cancer. He is survived by his wife, Kelly, and their three sons: Mike, Steven and Nate. 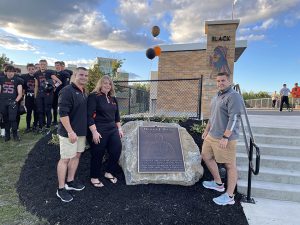 “Above anything, Mike was a family man,” said Board of Education President, Michael Bodnar. “A proud husband to his wife Kelly, and a proud father of his three sons: Mike, Steven and Nate. While we will always mourn the loss of this very special friend to our district, this memorial rock outside Black Horse Stadium will be a permanent reminder of the legacy Mike left behind. We will always be appreciative of his dedication to our students, faculty and staff.”