The Top 10 recognition, a tradition unique to Schuylerville CSD, has been expanded this year to a Top Graduate recognition in an effort to honor the hard work and achievement of more students. Beginning with the Class of 2022 and for each senior class moving forward, anyone with an average of 96 or higher will be featured in the annual Top Graduate recognition released in June. This year, there are 16 students that fall under this ranking. In the Class of 2022 Top Graduate video, students reflect on their fondest memories and offer advice to their younger peers.

“These students should be extremely proud of all they have accomplished during their time at Schuylerville,” said Principal Ducharme. “So often, students are edged out of the Top 10 by a very small percentage point. Expanding our academic recognition to those with 96.0 grade point averages and above offers a greater opportunity to showcase the academic caliber of more Schuylerville students. Congratulations to this year’s top graduates!”

Future plans: Anna will attend Marymount Manhattan College and pursue a BFA in Acting and a BA in Theatre Arts and Directing.

Future plans: Ava will attend the University at Rochester and major in psychology with a pre-med track.

Future plans: Caitlin will attend St. John Fisher College where she will be a track and field athlete and major in mathematics. 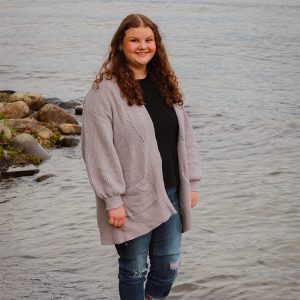 Sadie Tavares’ dedication to her studies resulted in her accomplishment of Class of 2022 Valedictorian, as well as a number of other achievements, including:

Participation in clubs, activities, and athletics

Sadie dedicated her time to the following initiatives:

Megan Stadel’s dedication to her studies resulted in her accomplishment of Class of 2022 Salutatorian, as well as a number of other achievements, including: earning a 100 on her NYSSMA solo during junior year and being selected as an alternate for the 2021 NYSSMA Conference All-State Symphonic Band.

Participation in clubs, activities, and athletics

Megan played softball throughout all four years of high school and was a captain senior year. She also participated in French club, National Honor Society and the Varsity Club, and served as a Band Librarian during her sophomore and senior years.

Megan dedicated her time to local non-profits including Saratoga Bridges and the H.O.P.E Animal Shelter. She also volunteered at local sporting events for both travel and school sports, and tutored students in various subjects, including algebra and French.