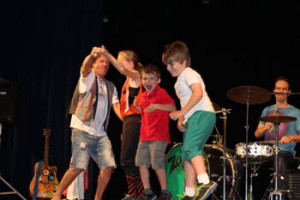 The Zucchini Brothers performed a special concert for Schuylerville Elementary School on Thursday, June 11 to say thank you to the students and staff who helped raise more than $700 to help replace several of the band’s instruments. The instruments were stolen out of guitarist and singer Jack Powell’s car while he was substitute teaching at the BOCES F. Donald Myers Education Center in March.

“Jack is a great guy with a heart of gold and he was truly thankful for the response from Schuylerville students and staff,” said Peter Carner, a fourth grade teacher at Schuylerville Elementary School.

Second grader Ashleigh Tanner was so upset with what happened to Jack Zucchini that she made a poster asking for donations and had her parents bring it to work. She then brought all of the donations into school to donate to the Zucchini Brothers.

“Ashleigh knew that what happened to Jack was wrong and hurtful and she wanted to show people the right response,” Carner said.

ABOUT THE ZUCCHINI BROTHERS

Performing a variety of shows across the country, the Zucchini Brothers come to Schuylerville bearing such messages as the importance of personal health and hygiene, safety with strangers, environmentalism, motivation and much more! Their catchy songs and steady beats bridge the music gap between kids and adults, while teaching important life lessons.

For more information on the Zucchini Brothers, click here.