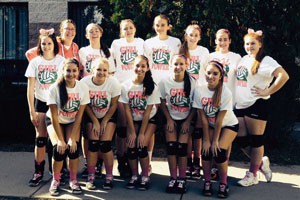 The Schuylerville varsity volleyball team competed in the sixth annual “Power of Pink” volleyball tournament at Queensbury High School on Saturday, Oct. 11. The goal of the tournament was to raise money for the American Cancer Society and 25 different schools from across the region took part.

Players on the Schuylerville team each collected two donations to raffle off in a basket drawing on senior night. The tickets for the raffle were $10 each and the basket was worth more than $700. The team far exceeded its goal of $1,000 by collecting $1,440 in ticket sales. The Greenwich Elks donated $100 toward the team and DK&B Logistics donated $500 toward the girls’ total donation. In total, the team raised $1,952.

“It was awesome to contribute to something so massive,” Coach Kristin Poutre said. “The competition was amazing; the girls worked together with other teams to raise money for a good cause and had a lot of fun!”

Schuylerville ranked fifth out of 25 teams for the amount donated and the entire tournament raised $26,000.

The Schuylerville varsity volleyball team ended up third in the Diamond Division.