The Schuylerville varsity girls soccer team and the varsity field hockey team have a lot in common, including both marching into sectionals with a share of the Foothills Championship title. The two teams compete on the same turf and often practice alongside each other on the same field, playing two very different sports, but writing a very similar story.

“It’s been a tremendous season for both teams,” said Michael Kopp, girls varsity soccer coach. “I’m so proud of my players and extremely impressed with the skill and teamwork of Coach Lloyd’s team. It’s a shame that with scheduling we don’t often get to see each other play.” 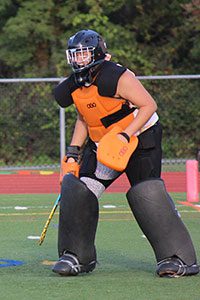 For now, though, both teams head into their respective Section II tournaments, sitting atop the seedings at No. 1 and No. 2. Together, the teams are dominating, with a record of 26-3-2 this season.

“Both teams have worked extremely hard to maintain a high level of play,” said Erin Lloyd, varsity field hockey coach. “We had a large senior class last year, and we knew there were big shoes to fill this season to maintain a high level of success as a team. Meanwhile, Coach Kopp’s team has been battling through injuries all season long. All of these girls, on both teams, have risen to the challenge and continue to strive to better both programs.”

Both teams begin sectional play at home, with the No. 1 seeded varsity field hockey team taking on No. 8 North Warren on Wednesday, Oct. 19 at 3 p.m. The No. 2 seeded varsity girls soccer team will face off against the winner of the Albany Academy vs. Holy Names game in the quarterfinals on Monday, Oct. 24 at 3 p.m.

“We are all close friends in school, so it is very exciting, and rewarding to see both teams winning Championships,” said Amy Moreau, junior captain on the varsity girls soccer team. “We wish them continued success as they enter the Sectionals, and beyond and we know they’ll be cheering for us too!”