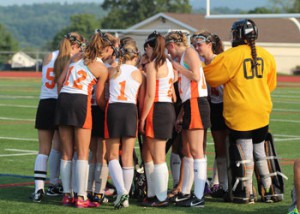 “Our team’s motto was ‘Work Horse!’ The entire team exemplified the meaning of this motto,” Lloyd said. “They were true team players that worked tremendously together.”

Lloyd’s team had a successful fall season both on and off the field. The team went 19-0 in the section and 19-1 overall. The team achieved the New York State Public High School Athletic Association Scholar Athlete Team Award, several players were named to the Foothills All-Star Team and senior Kaitlyn Gunter was named to the All-State Field Hockey Team.

“Coach Lloyd is very deserving of this recognition,” Athletic Director Heath Morris said. “She represents Schuylerville with pride and her team demonstrates the true meaning of scholar athletes.”