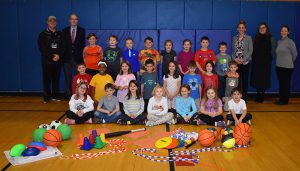 It was a six month fundraising campaign that raised $570,000 among 15 counties in New York state for the American Heart Association. From January to June, organizations and businesses took part in the fundraising effort through various activities, including Heart Challenges and Walks, Heart Balls, and Go Red events.

Of the more than half million dollars that was raised for the 2019 campaign, more than $13,000 was raised by Saratoga Hospital alone, with Schuylerville Central School District students now receiving a benefit of the efforts.

Schuylerville is one of three local school districts that received a donation of new recess and physical education equipment, as a result of Saratoga Hospital reaching incentive levels for its fundraising efforts for the Capital Region Heart Walk & Run held in June.

Jessica Pettengill, the Development Director of the American Heart Association paid a visit to Schuylerville Elementary to present the new equipment, including sports balls, jump ropes, frisbees and bats.

Pettengill was accompanied by Jeff Winacott, the Administrative Director of the Cardiovascular Service Line at Saratoga Hospital.

“The Schuylerville Primary Care office is one of the busiest in our group, and to be able to support the American Heart Association and give back to the school and the community is great,” said Winacott.

The new equipment will be used for students in grades K-5 at the elementary school.