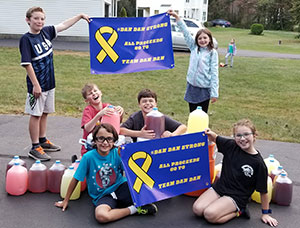 Schuylerville students are coming up with clever ways to show their support for a fellow classmate battling cancer. Seventh-grader Daniel MacMillan was diagnosed with E-Wing Sarcoma in June. Since then, his fellow Schuylerville classmates have turned their ideas into money to help in MacMillan’s fight.

Over the summer, a group of five Schuylerville Elementary and Middle School students came up with an idea to run a lemonade stand at Schuyler Park to raise money for MacMillan.

“When we heard that Danny was sick, we wanted to do something to raise money for him and raise his spirits,” said fourth-grader Seth Frydel.

“He’s our friend and it felt good to know we were helping him,” said Jordan Battle.

In the fall, two Schuylerville Middle School students decided they also wanted to help. Seventh-graders Christopher Buettner and Bridgette Lewie each decided to forego birthday gifts and instead asked for donations for MacMillan.

“I saw my birthday party as a great way to help a friend,” Lewie said. “The guests at my party know Danny and they all loved the idea.”

Lewie and Buettner donated nearly $500 from their birthday parties to the MacMillan family.

Schuylerville High School’s varsity club helped raise money for MacMillan through a tip jar they put out at all fall concession stands. They presented the MacMillan family with a $600 check at the end of the fall season.

Fence of Ribbons and Hope

Students are continuing to come up with ideas to show their support. Currently, the middle school’s FBLA club is sponsoring a Fence of Ribbon and Hope for MacMillan. Each student or staff member who makes a donation can pick a ribbon of their choice to tie on the fence in the front hallway. All of the donations will be presented to the MacMillan family.