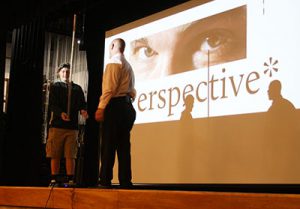 Schuylerville students in grades K-12 are practicing their ABCs to help combat bullying. It’s all part of a message from the “Sweethearts & Heroes” presentation students attended on Monday, Sept. 12. Students of all grade levels were engaged as they listened to a former professional mixed martial arts fighter explain what actions they can take as bystanders when they witness bullying.

“It was much different from the presentations we have seen in the past,” said 11th grader Olivia Edgar. “It was fun, interactive and we didn’t know what was going to happen next.”

The district held four age-appropriate presentations during the day, followed by a parent program in the evening. While high school students were greeted with a video montage of presenter Tom Murphy’s former MMA fights, elementary school students were welcomed by Murphy transforming into superhero Mr. Incredible. Despite the varying presentations, Murphy’s message was the same. Students were taught that to be somebody’s hero, it’s as easy as A, B, C:

Older students also heard from special guest Rick Yarosh, a retired U.S. Army sergeant injured in Iraq, who suffered burns over most of his body. Yarosh told students to remember H.O.P.E., what he refers to as “Hold On Possibilities Exist,” and spoke about sweethearts, the people who have the power to give others hope.

“Sgt. Yarosh was inspiring,” said eighth-grader Sebastian Barrett. “His story is incredible and his message of hope during rough times will definitely stick with me.”