Members of the Schuylerville High School Junior Class got a firsthand look Wednesday, May 9 at the dangers of driving while distracted or ability impaired. The Saratoga County Sheriff’s Office set up a driving course outside the school, where students were given the opportunity to drive a golf cart while wearing goggles that alter depth perception and vision, mimicking the visual effects of driving under the influence of alcohol. Students were challenged to navigate through the course, with passengers, while trying to maintain focus on the road and obey traffic laws.

“It was our goal to expose students to the real-life dangers of being a driver or a passenger in a car while being under the influence,” said High School Principal James Ducharme. “We’re hoping what they experienced today will make an impact on their future choices.” 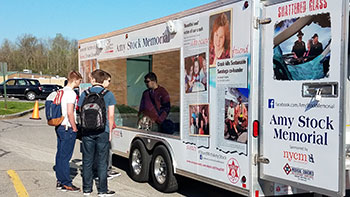 To help support the message, students were also able to view a memorial created in the memory of Amy Stock, a professor killed July 19, 2015 on her way home from babysitting, when a repeat drunken driver, going 65 mph down an Albany city street, ran a stop sign and hit Stock’s car. His blood alcohol level was .27, more than three times the legal limit.

Students then spent the afternoon listening to a presentation from Saratoga County Principal Court Attorney Matthew Coseo and Captain Morley from the Saratoga County Sheriff’s office. The presentation focused on the many factors and choices we make as individuals when driving a vehicle. It covered distracted driving, not only as a driver and passenger, but also as a bystander. Mr. Coseo and Captain Morley provided real-life videos and pictures to illustrate the dangers and consequences of distracted driving.

This opportunity was made possible by Mrs. Wilday, High School SADD Advisor, The Prevention Council, and the Saratoga County Sheriff’s Office.