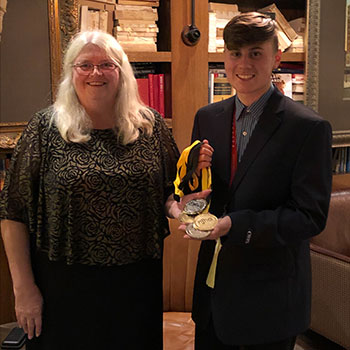 Schuylerville High School sophomore Kohlby Himelrick left the National Junior Horticulture Association’s National Convention with several awards in his suitcase. Himelrick was one of just three New York State students selected to represent the state and compete in the national convention in Lincoln, NE from Oct. 11-14. He has been involved in 4-H since he was eight years old and made the state 4-H team after participating at the county and state levels.

As part of the state team, Himelrick competed in the identification competition, which consisted of identifying samples, a writing test and judging. The New York State team placed fifth. Himelrick also competed in several programs individually. He won a grand national award and two blue ribbons in photography, a grand national award for his jalapeño jelly, which combined a combination of sweet and heat, a national award for fruit and his take on cinnamon applesauce, as well as a writing award for horticulture-based poetry.

While at the convention, Himelrick also had the opportunity to participate in workshops held at the University of Nebraska, as well as tour aquaponics facilities, visit ballparks to learn turf management, visit the Omaha zoo to see the desert dome and rainforest environment and visit the Lauritzen Gardens.