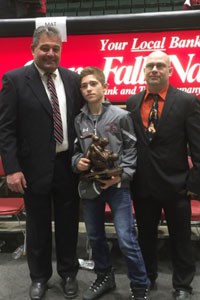 Anderson earned a first place finish at the tournament after pinning all three of his opponents in the first period. Anderson has a current season record of 29-1, a career record of 99-6, and is currently ranked No. 1 in the state.

He, along with senior Tyler Green, will advance to the New York State High School Wrestling Championships on Feb. 26 at the Times Union Center in Albany.