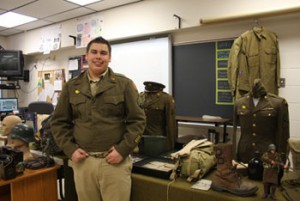 Schuylerville High School sophomore Walter Taras brought his passion for American history to his classmates on Friday, March 11. Taras transformed John Reilly’s history classroom into a museum exhibit on both world wars. He brought in dozens of items, from field gear and equipment to cookware and communications, which he and his family have been collecting for decades.

“My uncle’s grandfather fought in World War II and he collected this stuff throughout his life and now I’m collecting it,” Taras said. “I guess you could say I was bit by the history bug.” 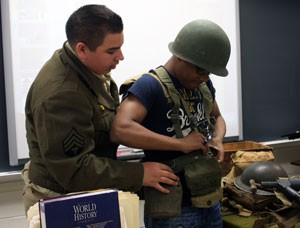 Taras put together an interactive presentation for his classmates, showing off his collectibles, while speaking about how things changed between World War I and World War II in terms of uniforms, gear and weapons. He then gave his classmates a chance to explore his collection and try on some of the gear.

“I wanted to share with my classmates because I believe everyone should know the great history of our country,” Taras said. “It was a lot of fun getting to share my passion.”