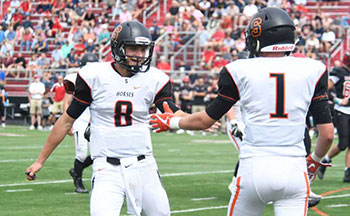 Schuylerville High School senior Stratton Sherman is being recognized for excelling on the playing field, in the classroom and in the community. Sherman was awarded the National Football Foundation and College Hall of Fame Capital District Chapter Student-Athlete Award during a dinner on Monday, March 4 at the Red Lion Hotel in Albany. From 55 school representatives, Sherman was among 12 finalists selected to speak at the dinner. A video recording of his speech played during the dinner, as he was on the senior trip, and Sherman was ultimately chosen as the overall winner by the foundation’s board of directors.

As part of the honor, a plaque commemorating the achievement will be placed at Schuylerville High School and Sherman will receive a monetary scholarship. This is the second year in a row that a Schuylerville athlete was named the overall winner of the student-athlete award. Derek Willson was recognized with the honor in 2018.