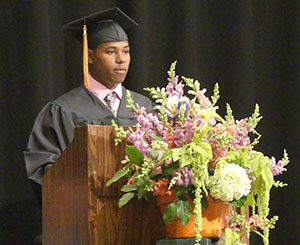 Schuylerville High School 2018 graduate Xavier Jones was selected as the student speaker for the F. Donald Myers Education Center’s Career and Technical Education Completion and Award Ceremony on June 18. Jones completed the Heating, Ventilation, Air Conditioning and Refrigeration (HVAC-R) program and joined the other 280 Career and Technical Education students in receiving their completion certificates at the ceremony. In his speech, Jones said “the world around us is changing and these young adults have been given the tools to go out there and make a change.” Congratulations to Jones and the more than three dozen other Schuylerville CTE graduates listed below.