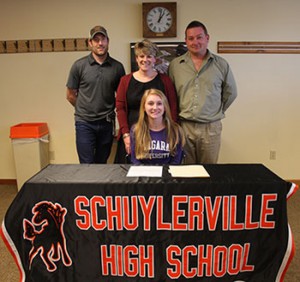 Schuylerville High School senior Julia Freemire has signed her National Letter of Intent to attend Niagara University and run cross country in the fall. Freemire received a partial athletic scholarship, along with some academic scholarship money.

Freemire signed the letter in front of administrators, her coach, her parents and the media on Friday, April 15. She thanked coach Kevin Emblidge for helping her become a better runner.

“He has gotten me to where I am at this point, and he’s really helped me strengthen my running,” Freemire said. “I wouldn’t be where I am today if I didn’t have Schuylerville cross country in my background.”

Freemire plans to major in biology in the fall.