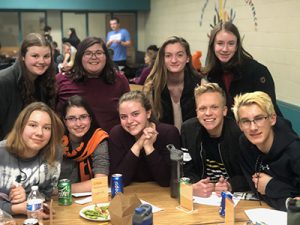 Schuylerville High School’s Academic Team competed in the Pre-Holiday Academic Tournament in Essex Junction, Vermont, placing 11th out of the 32 teams that competed at the varsity level. The event is considered the largest in New England. Schuylerville’s team captain,  Cody Belden, finished as the third ranked player overall in individual scoring.
The team was coached and accompanied by Schuylerville’s U.S. History and Government and Economics teacher, Thomas Bryson.

The competition is part of the national quiz bowl championships, organized by the National Academic Quiz Tournament, LLC (NAQT). NAQT’s goal is for its “writers and editors to provide accurate, original, and interesting questions on academic subjects and general knowledge. The quality of those questions draws teams from across the nation and around the world to compete at its annual championships.”