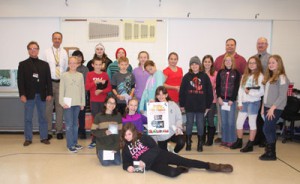 The 2013-14 Schuylerville fifth-grade chorus is featured on a new Christmas card/CD that was created to help raise money for the Melodies Center for Childhood Cancer and Blood Disorders at Albany Medical Center.

The project was put together by three Schuylerville School District employees: John Guay, high school guidance counselor, John Haggerty, director of student services and Don Young, director of transportation, who perform outside of school in a surf band called Big Fez and the Surfmatics.

“In recent years, we’ve had friends and family members receive treatment at the Melodies Center and we decided that we wanted to donate back some of our time and efforts as a way to say thank you,” Haggerty said. 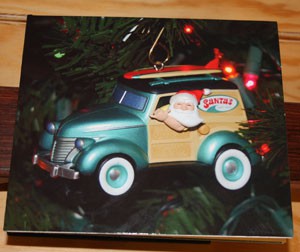 The CD cover itself is designed as a Christmas card and comes with a holiday envelope. The band recorded four Christmas songs that are included on the CD, which they are selling for $10 each. The band paid for all of the costs associated with the project, including the recording and manufacturing of the CD, so every dollar from the sale of the CDs will be donated to the Melodies Center.

“Two Schuylerville alumni were instrumental in making this project happen,” Guay said. “Peter Young and Anthony Cottone recorded the project right here in our school’s recording studio and didn’t charge us a penny for their time.”

Each member of the chorus who participated in the recording was given a free copy of the Christmas card/CD in appreciation of their efforts on the project. The chorus, led by director Christopher Tucker, performed on two of the four songs.

“The kids did a fantastic job,” Young said. “I think they learned a lot about the process of recording. We were excited to be able to include them in this project.”