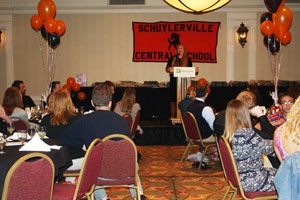 The banquet’s key note speaker was Abby Martin, a 1998 Schuylerville High School graduate who went on to play field hockey at the University of North Carolina. Martin spoke about her time at Schuylerville High School where she played three sports, received several honors and helped her field hockey team to the state championships in 1995 and 1996.