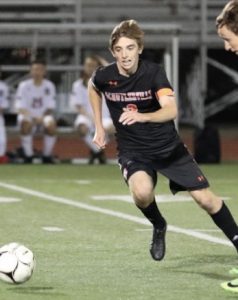 Schuylerville varsity boys soccer player Zach Saddlemire was selected as an all state player by the state soccer committee. Saddlemire is the second player in Schuylerville’s history to be selected for the honor.
“Zach has been a major part of his team’s success over the past three years with his tremendous work rate, durability and desire to win,” said head coach Dave Gauci. “He was voted captain the past two seasons and has led his team to a 44-15-1 record in his high school career, while scoring 20 goals and 25 assists. He also was a key contributor to this year’s team that made it to the New York state final four.”