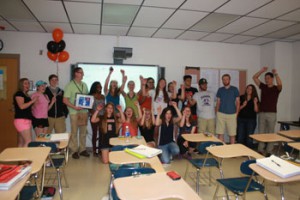 He was nominated by a Schuylerville parent, who wrote, “Mr. Hayes is my daughter’s pre-trig teacher. I am impressed by his enthusiasm for math, a subject that can be difficult for some students. He takes the time to make sure that each student understands the concepts, making himself available after school if necessary. More importantly, I am impressed with the life lessons he has imparted. Mr. Hayes’ son recently lost a battle with cancer and Mr. Hayes has shown my daughter and her peers how to face adversity with dignity, that family is of utmost importance, and that you can teach more by example than by words. I am grateful my daughter was in his classroom this year. I only hope Mr. Hayes knows how much he is loved and appreciated by his students and the community of Schuylerville.”

After being nominated, Mr. Hayes received the most votes from community members during a three-week voting period.

Click here to see the full story in Saratoga Today.