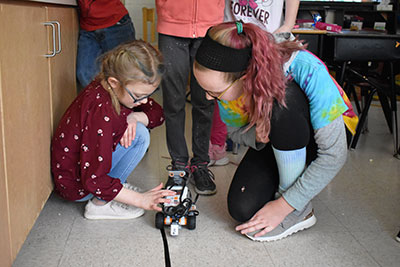 The Schuylerville Middle School robotics club took time away from building and programming to share their passion for technology with their younger classmates. The club recently visited several first and second grade classrooms at Schuylerville Elementary School to show off their robots and teach the students how they operate autonomously – meaning, all on their own.

“It was really cool and I can’t wait to play with them again,” said second-grader Aedan Hays.

Club members supervised as each student got the opportunity to activate a robot and follow its progress as it moved independently along a strip of black electrical tape set up on the classroom floor. The younger students were amazed as the robots rounded corners and stayed on the path.

“It’s crazy how they can move around with no driver, but it’s really cool,” said second-grader Michael Starowicz.

Club members hope their visit might spark a future interest in robotics.

“It’s a lot of fun to visit the younger grades and show them what robotics is all about,” said sixth-grader Emma Leavens. “They are all so excited and intrigued that we end up having just as much fun as they are.”

Visiting elementary classrooms is just one of the many activities the robotics club has been involved in this year. In January, the club took part in its second-ever competition, hosting Granville. Students used Vex IQ kits to build robots and then programmed the robots to go head-to-head in competition. Club advisor Mark Belden said it was a great learning experience for both schools.