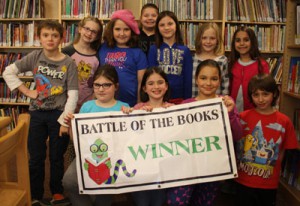 More than two-dozen Schuylerville Elementary School students in third, fourth and fifth grade put their reading and memorization skills to the test, taking part in the fifth annual Battle of the Books on March 14 at Skidmore College.

More than 300 students from 13 school districts took part in the competition. Students at each grade level read 10 books, both fiction and non-fiction, to prepare for the “battle,” which consisted of 40 questions for a two-team battle, or 60 questions for a three-team battle.

“I am very proud of all of the students who proudly represented Schuylerville by exemplifying sportsmanship throughout the competition,” librarian Maria Weeks said. “Participating in Battle of the Books takes great dedication and these students should be pleased with how they performed.”

Schuylerville students began preparing for the competition in September, by reading the books and discussing the details during their lunch period, similar to a book club.

“I’ve definitely read some books that I wouldn’t have picked by myself and I liked them a lot,” said Hannah Citron, a third-grader and team captain. “It’s fun being with kids who are just like me, who like to read.”

This was Schuylerville’s fourth year competing in Battle of the Books.