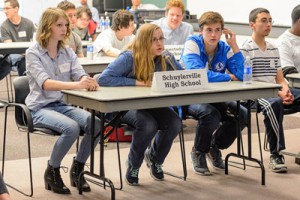 The Schuylerville High School quiz team took home second place at the annual Viking Challenge at Hudson Valley Community College on March 16. Schuylerville beat out eight other schools to secure its third consecutive podium finish. The competition is a computerized trivia challenge, based on the popular board game, Trivial Pursuit.

The Viking Challenge is just one of the many successes the quiz team has seen this year. In June, the team will travel to Washington D.C., to compete in the National Academic Championship. Schuylerville was invited after finishing third in the Post-Star’s Academic Bowl.