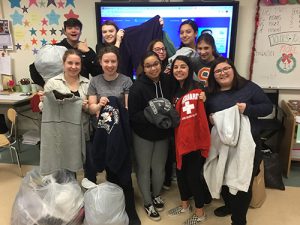 As part of a recent community service project, students in Schuylerville High School’s National Junior Honor Society (NJHS) held a sweatshirt drive to benefit The Giving Circle of Saratoga Springs, a non-profit local organization that assists the homeless population. More than 100 sweatshirts were collected. In addition, NJHS hosted a dress-down ‘sweatshirt’ day, which raised another $100. In the spring, Schuylerville High School National Honor Society members will follow-up with a project of its own, preparing and serving dinner to the homeless through the same organization.