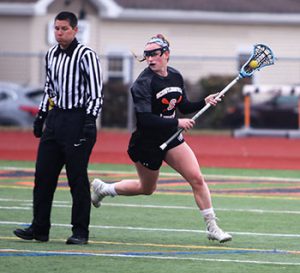 Schuylerville High School senior Amy Moreau has been named an All-American by U.S. Lacrosse, as well as an Academic All-American for the Adirondack Chapter. The award recognizes a graduating senior in each chapter who exemplifies the spirit of the game of lacrosse, on and off the field, is an outstanding student and a valued role model in her school. She will be honored at the Annual Hall of Fame & Honors Banquet on Wednesday, June 20. Additionally, Moreau has been named the sole recipient of the Jackie Pitts Award, which honors those who combine academic, service and leadership with athletic accomplishments. During her Schuylerville career, Moreau set the scoring record for Schuylerville with 293 career goals and 103 assists. In the fall, Moreau will play Division I lacrosse at the University of Massachusetts Amherst.