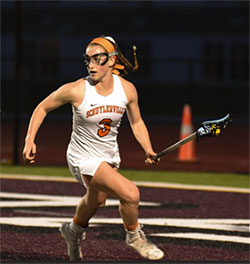 Schuylerville High School student Amy Moreau is entering her senior year with the college search process nearly complete. On July 3, Moreau committed to playing Division I lacrosse at the University of Massachusetts Amherst in the fall of 2018.

“It’s really exciting,” Moreau said. “It feels great to be done with the whole process and know what school I’ll be applying to in the fall.”

Moreau was invited by Coach Angela McMahon to attend a two-day overnight camp at UMass Amherst in June. Moreau says as soon as she stepped foot on campus she knew it was a good fit.

“It’s a huge school and it has so many opportunities,” Moreau said. “With 90 majors offered and not knowing what I want to do yet, it just felt right.”

Moreau toured the campus, ate in the dining hall and got to meet and workout with some of the other recruits. She says while she looked at other Division I programs, UMass stood apart from the rest.

“Lacrosse aside, it came down to the best school for me academically,” Moreau said. “It’s just an added bonus that UMass has a good team.”

Moreau will be joining a winning program. For the ninth straight year, the Minutewomen were crowned champions of the Atlantic 10.

Moreau is a member of both the varsity lacrosse and soccer programs at Schuylerville High School. She has been playing both sports since elementary school and says it wasn’t until last summer that playing lacrosse after high school became part of her plans.

“It was always soccer,” Moreau said. “We have a great lacrosse program in Schuylerville, but it’s young. I never thought I’d have the experience and skills to play lacrosse at a D-I school.”

Moreau is spending the summer practicing and playing in tournaments with her travel team, Albany Elite. She says she is looking forward to her senior year, hoping to make a memorable season in both lacrosse and soccer.

“Hopefully we’ll go deep into sectionals in soccer and in lacrosse we’ll be trying to win that first regional game,” Moreau said. “I’m excited to enjoy my senior year and prepare to play at the collegiate level.”