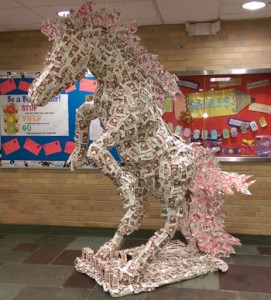 The carton creation earned the school a $1,000 prize in the “Made By Milk” contest, which encourages students to build strong bones with milk and learn about recycling and responsible forestry.

Students in the third-, fourth- and fifth-grade art clubs worked for more than a month on the project. They began by collecting the milk cartons from the food services staff in the cafeteria and then deciding as a group what they should build.

“When I first proposed the idea of doing the project, they were very excited,” said art teacher Michael Shea. “I had each student in the fifth-grade art club submit an idea; then we voted as a group.”

The result was an eight-and-a-half foot tall horse, which impressed a panel of judges and helped secure one of five prizes. The students plan to use the prize money to help beautify the courtyard outside the elementary school.

“The students have a bunch of ideas, including having a sculpture garden, an outdoor mural wall and picnic tables with art permanently painted on them,” Shea said.

“I was amazed at how the project came out,” fifth-grader Gabriella Everleth said. “I never knew milk cartons could build something so cool. It was fun to build something that can help our school.”