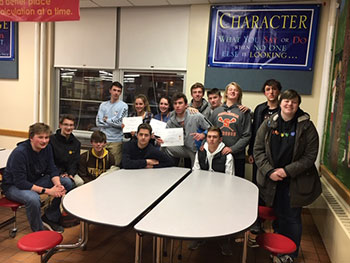 The Schuylerville High School Math League clinched its second straight Warren-Washington-Saratoga County Math League championship on Wednesday, March 13. It was the third time in four years Schuylerville has taken first place. Schuylerville’s team defeated seven other area schools to claim the league title, winning by 13 points overall with senior Claire Barton leading the way. Barton was just one point shy of being named the high scorer for the entire league.

“The students really took ownership of the club,” said advisor Jim DeGregory. “With all of the clubs and sports these students are involved in, time is at a premium and these students did an excellent job of balancing all of their commitments and dedicating their time and effort to Math League. The hard work of the students and their teachers make this club possible and very enjoyable.”

The season consisted of five math meets, which started in November and ran through March. At the meets, students worked both individually and as teams to solve challenging math problems in a limited amount of time.

Congratulations to the Math League members and their advisor Jim DeGregory!