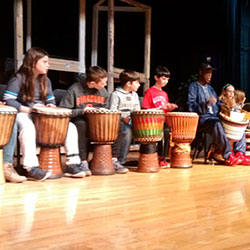 Schuylerville Elementary School students recently got a music lesson from a master drummer as part of an interactive assembly. On March 19, students in third, fourth and fifth grade attended the assembly, where Bolokada Conde, a master drummer from Guinea, West Africa, taught students about his culture, demonstrated several drumming patterns and invited students up on stage to learn a basic pattern using two different drums. Students had fun asking questions about Conde’s homeland and musical experiences.

After the assembly, band and chorus students remained for an hour-long workshop. Students got another turn on the drums and learned to put several patterns together into a song with Conde leading the group.

The workshop was made possible through a local arts grant and the Rural Soul Studio, which hosted Conde for a weekend workshop and helped organize the event for the district.

Click the video below to see part of the assembly.