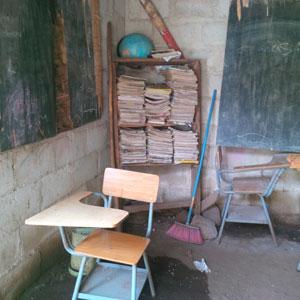 A group of Schuylerville High School students in Peter Schmidt’s Spanish II class had a special visitor on Tuesday, May 3 who spoke about the value of learning a second language. George Sicard, a Lake George businessman and firefighter, talked to the students about his involvement with two volunteer programs that travel to Guatemala to help improve the quality of life for the people living there.

“It’s a wonderful feeling to be able to give a person a pair of glasses for the first time, or help build them a clean classroom,” Sicard said. “But, when we’re trying to help, the language barrier is an obstacle.”

Sicard began volunteering with the Glens Falls Medical Mission Foundation several years ago. The group was formed to provide services to a medically under-served area of Guatemala. In 2007, Sicard began participating in a new project called La Mancha. Sicard travels with the La Mancha team for one to two weeks a year to Cuilapa, Santa Rosa, Guatemala to complete various projects at a girls’ orphanage.

“Not many of us are conversational in Spanish, so communicating is a struggle,” Sicard said. “Thankfully, we’ve had some great student volunteers who do know the language.”

Sicard says he shares his experiences with high school students to get them to think outside of the box.

“I’m not here to recruit you to be a volunteer,” Sicard told the students. “But, inside each of you is a special talent and no one is going to find it for you. It’s up to you to have an open perspective and find how you can make a difference.”