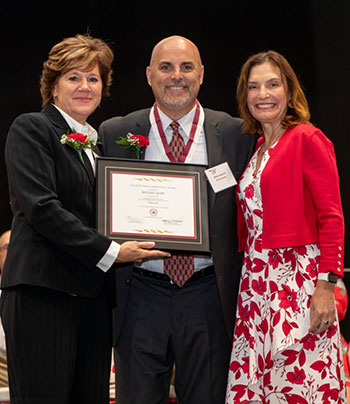 Schuylerville High School aide Michael Kopp was inducted into the SUNY Oneonta Athletic Hall of Fame on Saturday, Sept. 14. Kopp was a four-year starting player for Oneonta’s soccer team from 1984-87. Kopp says he was elated and humbled when he received the news that he would be included in the 2019 class of Hall of Fame inductees.

“Memories of my first game as a five-year-old to my last game as a college player sped through my mind and flooded my brain,” Kopp said. “I thought about all of the sacrifices my parents made to provide me the opportunity to achieve this honor.” 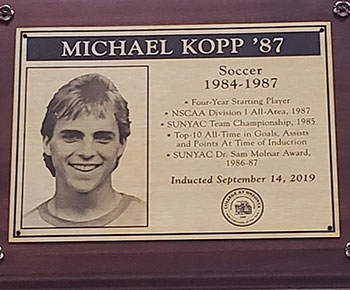 During his four years at Oneonta, Kopp and his teammates compiled an overall record of 51-24-4 while capturing one SUNYAC title and playing in the SUNYAC tournament three times. Kopp was selected as a Division I All-Area Player in 1987 and was twice selected as an honorable mention All-Conference Player. Academically, Kopp was recognized as an Oneonta Scholar Athlete and named the Dr. Sam Molnar Scholar Athlete, the highest individual honor that can be achieved in the SUNY conference.

Kopp says 35 years later he is still very close with his former teammates and many of them traveled to the induction ceremony to show their support.

“In so many ways, the recognition was just as much about them,” Kopp said. “We had a superior team and several of them deserve to be in the Hall of Fame as well.”

Kopp’s passion for the game led him to coach the Schuylerville varsity girls soccer team from 2015 to 2017. Under his leadership, the team went 36-10-6 and achieved the highest state ranking in school history. Kopp inspired his players and taught them that with hard work they could achieve anything.

“Over the three years I played for Coach Kopp, he taught me and my teammates many lessons that I’m forever grateful for,” said Emily Vallee, Class of 2018. “He taught us that in order to be successful as a team, we had to embrace our roles on the team and be fully dedicated to it. Coach always went out of his way to make sure we were always at our best on and off the field.”

Kopp had dozens of friends, family and teammates in attendance at the induction ceremony to show their support, including fellow Oneonta alum and Schuylerville School Resource Officer Sheriff Zachary Warriner.

“Mike is such a great guy, so I wanted to be there to see him recognized for a great career,” Warriner said.

And for Kopp, the support was overwhelming.

“Looking out and seeing my 88-year-old coach, my parents, sisters, teammates and of course my amazing wife and beautiful children, was almost too much,” Kopp said. “If ever there was such a thing as an out of body experience, well, that was it.”