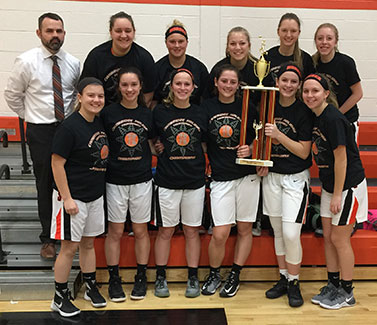 The Schuylerville varsity girls basketball team won the Cambridge Holiday Tournament on Dec. 30. The team beat New Lebanon in the opening round and won by two points to Cambridge in the final round. Senior Hunter VanArnum scored the winning shot with 1.8 seconds left on the clock to lift Schuylerville to a 41-39 victory. Junior Emily Vallee was named the tournament MVP and senior Callie Beck was named to the All-Tournament Team.