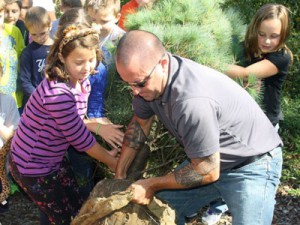 Schuylerville fourth graders spent part of the day Friday applying a lesson they learned as part of the ELA Modules to a real life problem that affects kids and teenagers around the world: bullying.

In class, students have been studying the Iroquois Nation. They have learned about the Tree of Peace and how it symbolizes the Five Nations uniting as one Confederacy. History says that weapons would be buried under a tree to seal a peace agreement, so, on Friday students took a similar action.

“We took our weapons of war – bullying phrases and actions and placed them in the ground,” Fourth Grade Teacher Peter Carner said. “It served as a reminder of our past and to teach us never to do it again.”

Students then planted their own Tree of Peace in the Outdoor Classroom on top of the buried bullying phrases.

“We hope it will be a symbol of peace for the entire Schuylerville community,” Carner said.