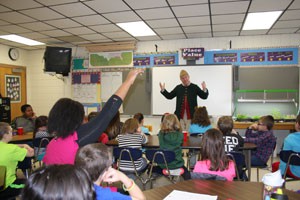 Schuylerville fourth grade students in Laura Foehser and Peter Carner’s classes are stepping back in time to learn about the American Revolution.

On Friday, Feb. 6, Sean Kelleher, a historian in the Town of Saratoga, visited both classes. Kelleher showed up wearing clothing from the time period and took on the role of a colonel of the local militia.

During the reenactment, students were encouraged to ask questions about the American Revolution and the role Schuylerville played.