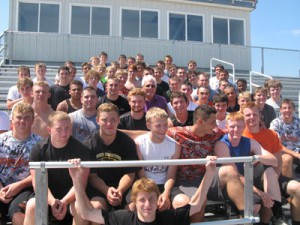 The Schuylerville JV and varsity football teams spent some time with a former NFL coach during practice on Wednesday, August 19. Dan Henning, former head coach of the Atlanta Falcons (1983-1986) and San Diego Chargers (1989-1991), stopped by the Black Horses’ field to talk with student athletes about teamwork and perseverance. He shared some of his experiences from his time as coach and offensive coordinator in the NFL, as well as his time as quarterback in the AFL and at the College of William & Mary. Henning stressed the importance of the team embracing this season as theirs.

“He reminded them that 30 years from now they will remember this season singularly,” said John Bowen, Schuylerville’s varsity football coach. “They will remember the 2014 season for what it represented and they will write a new story in 2015 that will create its own identity.”

Henning spoke to the student athletes about the expectations and hype surrounding their varsity team after it went 9-1 last season and finished a Class B runner-up in Section II. He told the team not to “eat the cheese.”

“He wanted to remind the boys that with last year’s success, they would be wearing a larger target and if they spend time listening to outside noise, they would get caught in the trap,” Bowen said.