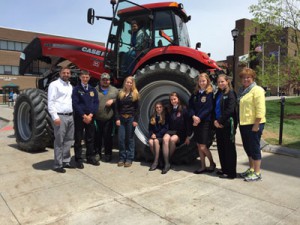 Ten Schuylerville agriculture students competed in career development events, gained knowledge through educational workshops and participated in agricultural tours during the 90th New York State FFA Convention, which was held at Morrisville State College from May 14 to May 16. More than 1,000 FFA members and guests from across the state were in attendance.

Schuylerville FFA members saw success during several of the state level contests referred to as Career Development events (CDEs). Below is a list of accomplishments:

“FFA makes a positive difference in the lives of students by developing their potential for premier leadership, personal growth and career success through agricultural education,” FFA Advisor Levi Cahan said.

Congratulations to the Schuylerville FFA members on another successful year!