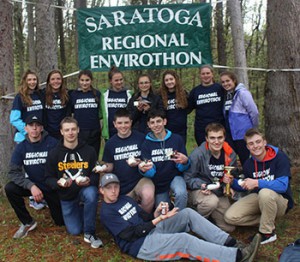 The Schuylerville High School environmental club took several first place finishes at the Saratoga Regional Environthon on Wednesday, May 4 at Saratoga Spa State Park, with the school’s boys team winning the entire event. The boys team, nicknamed the BBC II team, beat out 12 other teams from three counties and will advance to the state-level competition on May 25-26. The Schuylerville girls team took first place for oral presentation. It was also the first year Schuylerville brought an all-freshmen team.

“I am so proud of these students,” said club advisor Emily Flores. “It takes a lot of self-discipline, motivation and determination to prepare for this competition, team members must collaborate and work together to be successful.”

The competition tests students’ knowledge of conservation related topics such as soils, aquatics, forestry and wildlife. Teams from eight schools in Saratoga, Washington and Fulton counties competed and DEC staff and officials from other agencies served as volunteer judges.

The three Schuylerville teams that participated are listed below.