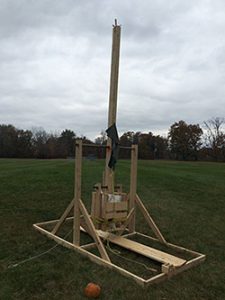 “We had been talking about trebuchets in class, but the students had not had the opportunity to construct one,” Gauci said. “So, when Julie White, a park volunteer, invited us to build a machine for the festival, my students were eager to get started.”

It took the students about two weeks to build and test. They started out by having groups develop models and test them. Then, once they understood the basic concepts of a trebuchet, the students created a full scale working device.

“When we first tested it we encountered some issues with how much force was generated,” Gauci said. “We had to adjust a few things on it, but eventually we were able to chuck a pumpkin!”