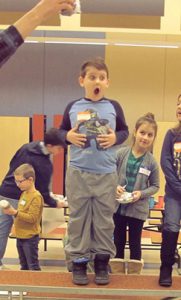 In the Brush Bots activity, kids made robots out of a small motor and toothbrushes. They then battled each other in a battle station.  Meanwhile, in the Wind Tunnel activity, kids created parachute-like contraptions of their own design, and then tested to see if their parachute would rise up and out of a wind tunnel.  In Lego Mazes, kids built paths, tunnels, doors, and ramps on a Lego baseplate to race a marble through.

“It was an exciting and fun-filled day for the participants and volunteers,” said Lisa Meade, parent volunteer. “The EYE program is a great way to expose children to engineering at a young age. The station I worked at encouraged and inspired the students to think critically, problem-solve, and work together as a team.”

Other activities included the Peg Board activity, which had kids working in small teams to ‘slow race’ ping pong balls down rubber band ramps on a peg board, designing the ramps to go as slowly as possible. Students also took part in an Egg Drop. They wrapped real eggs in cardboard, bubble wrap and duct tape, to see if they could keep their egg from breaking when dropped from a riser.

“Watching the pride of accomplishment on the faces of the children as they completed their challenge was amazing,” said Stephanie Knoeller, parent volunteer.

“It was wonderful to see so many of our high school and middle school students help run the EYE program,” said Tara McCaughey, parent organizer. “We had great support from the high school principal and advisers.  We plan to continue this relationship in the future.”

Special thanks to Thomas Poultry Farms who supplied the program with 23 dozen eggs for the egg drop.

The EYE program was created five years ago by Saratoga High School students as a way to get kids excited about engineering.  These high school students create all of the activities, and provide support for the school running the program.   Learn more by clicking here.