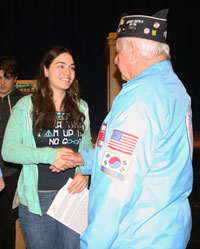 Eighth-grade students at Schuylerville Middle School got a firsthand lesson in history on Wednesday, Nov. 12, when a group of local Korean War veterans visited to share their stories and memories of the war, which is often referred to as “the forgotten war.” The presentation was part of the Korean War Veterans Association’s Tell America Program, which encourages veterans to travel to schools to give students a better understanding of the Korean War and its consequences.

“We don’t usually teach about the Korean War and communism until the spring, but for years I’ve wanted to do something around Veteran’s Day,” social studies teacher Christine Huestis said. “I was excited to work with the Korean War Veterans Association to bring this eye-opening presentation to Schuylerville.” 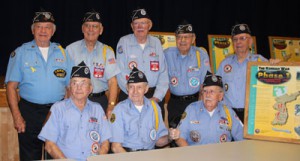 Eight veterans from Adirondack Chapter 60 were on hand to share their personal accounts and answer questions about the war. Paul O’Keefe, a Korean War veteran from Schaghticoke, served with the 24th Infantry Division, the first U.S. soldiers called to South Korea to fight with Republic of Korea troops. He told students about the harsh conditions his troops experienced.

“We lived like animals,” O’Keefe said. “The temperature on winter nights would drop to 40 to 50 degrees below zero and there were days when we didn’t have any food.”

Roger Calkins, a Navy veteran of the Korean War, talked about his experience aboard a ship in the Atlantic Ocean, discussed the price of the war in terms of casualties, and shared a recent satellite image that shows North Korea as almost completely black at night, in contrast to the bright lights of neighbor South Korea. Calkins said he was honored to speak to the students and appreciated the questions they asked.

“It’s a real gratifying experience to see that young people are so interested and want to know what happened. We really appreciate that,” Calkins said. “It makes you proud to be an American.”

The students seemed to appreciate having the personal stories to go with what they had learned in class.

“The war was a lot bigger than I thought and it was interesting to hear about it from people who were actually there and lived through it,” eighth-grader Collin Edwards said.

“It’s something I won’t forget,” eighth-grader Claire Barton said. “I learned about the Korean War in social studies, but what these veterans went through is something you can’t capture in a textbook.”

At the conclusion of the presentation, O’Keefe provided students with a definition of a veteran and reminded them that freedom is not free.

“A veteran is someone who, at one point in his or her life, wrote a blank check made payable to the United States of America, for an amount of up to and including his or her life.”