Exciting, reliable and cost-effective; those were the parameters of the Great Paper Roller Coaster Challenge given to eighth grade technology students. Acting as designers, students worked in teams of two and three to build a roller coaster out of card stock, taking into account cost of materials such as columns, beams, funnels and loops. At the conclusion of the build, students’ coasters went through five trials to determine whose design allowed for the marble to take the most amount of time from start to finish.

The requirements for each of the roller coasters included:

“Little degrees made a big difference,” said student Madelynne Solan. “It took just a little to throw everything off, so you had to be really exact.”

“Students had to think about the friction of the marble on the paper,” added technology teacher Mark Belden. “They had to have just enough velocity to keep the marble moving, but not so much that it would stop.”

Belden said making a plan and using logic are two of the biggest skills students learn during activities like the paper roller coaster challenge. Students took complete ownership of their projects, from assembling the frames to making sure the parts worked, and then test trials. 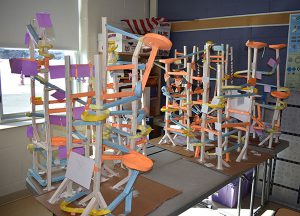 “They made all the parts themselves and had to really think about accuracy in measurements,” said Belden.

Belden says the goal of the project and the year-long technology class, is to give students a solid foundation of skills before they head to the high school level. All eighth grade students in Mr. Belden and Mr. Jorgensen’s technology classes participated in the roller coaster challenge, which took two weeks to complete.