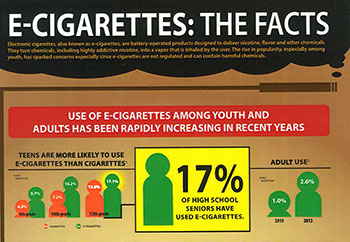 Electronic cigarettes, also known as “e-cigarettes,” “e-cigs,” and “vapes”, are becoming more and more popular, especially among teenagers. A 2015 National Youth Tobacco Survey found that one in six high school students reported using e-cigarettes in the past month. That number is alarming when you consider that in December, the nation’s top doctor advised young people to steer clear of electronic cigarettes, citing health risks. Below are answers to several questions parents and students may have about electronic cigarettes.

What are electronic cigarettes?

Electronic cigarettes are devices that heat a liquid into an aerosol that the user inhales. The liquid usually has nicotine and flavoring in it, and other additives. 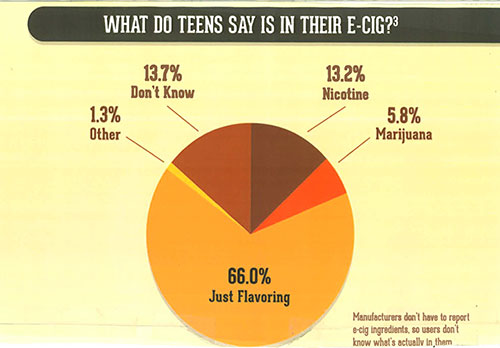 According to a 2016 Report of the Surgeon General, the nicotine in electronic cigarettes and regular cigarettes is addictive. E-cigarettes are considered tobacco products because most of them contain nicotine, which comes from tobacco.

Besides nicotine, what other ingredients are in e-cigarettes?

According to a 2016 Report of the Surgeon General, e-cigarettes can contain several harmful and potentially harmful ingredients, including: 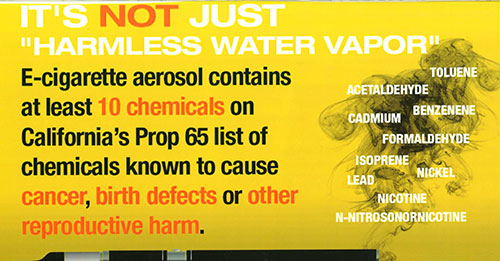 What are the risks of using electronic cigarettes?

A 2016 Report of the Surgeon General exposes the many risks of adolescents and young adults using electronic cigarettes. According to the report, brain development continues through childhood to about age 25, therefore nicotine exposure during these years can cause addictions and harm the developing brain. E-cigarette use has also been associated with the use of other tobacco products that can do even more damage to the body.
“Nicotine is a highly addictive substance,” said Thomas Frieden, Director for the Centers for Disease Control and Prevention. “Many of today’s youth who are using e-cigarettes could become tomorrow’s cigarette smokers.” 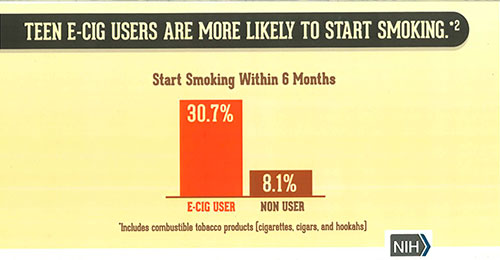 The 2016 report also states that breathing e-cigarette aerosol that someone else has exhaled poses potential health risks.

Because a young person’s brain is still developing, scientific studies show that it isn’t safe for them to use any tobacco product that contains nicotine, including electronic cigarettes.

What is Schuylerville High School’s policy on electronic cigarettes?

Page 9 of the Schuylerville High School student handbook states: There is to be no smoking, drinking, using drugs, using chewing tobacco or e-cigarettes or the possession of such items by students enrolled in our school, in school buildings, on school buses, and on school property, whether school is in session or not. We emphasize the term “possession.” Students are not to bring drugs, alcohol, cigarettes, chewing tobacco or other objectionable items, such as drug paraphernalia, to school. Attendance at school or school activities while under the influence of alcoholic beverages or drugs is also prohibited. This provision is being implemented in the interest of students’ health and welfare. By prohibiting all students from carrying and/or distributing drugs, alcohol, cigarettes, chewing tobacco, drug paraphernalia and other harmful items, we hope to discourage use of these products. Violation of this provision will result in severe disciplinary action. The provision also will be in effect at extracurricular activities, on school-sponsored trips and on school property at all times.