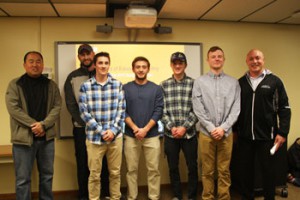 Six Schuylerville High School student athletes were recognized by the Board of Education at its meeting on Monday, March 21.

The boys 4×200 meter relay team was recognized for its success during the winter season. The team, Ethan Gray, Ben Phillips, Ian Luhmann and Joe Barber, advanced to the state indoor track and field championships after winning at the Section II Indoor Track and Field Qualifier. Baber also earned a spot in the 55-meter dash. 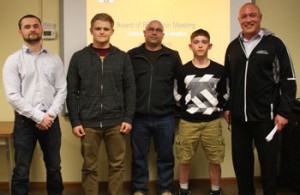 The board also recognized Orion Anderson and Tyler Green for their advancement to the New York State High School Wrestling Championships where Anderson earned the district its first wrestling state championship and Green won the Section II sportsmanship award.