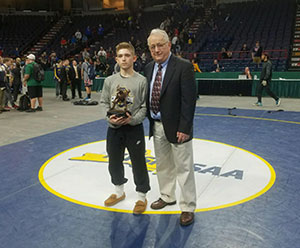 Schuylerville High School junior Orion Anderson has been named the ‘Most Outstanding Wrestler’ of the state championship tournament. The award winner is selected from both Division I and II. Anderson earned Schuylerville its second wrestling state championship on Saturday, Feb. 25 with a 12-4 win over Luke Bokina of Mattituck in the Division II 120-pound final at the Times Union Center.