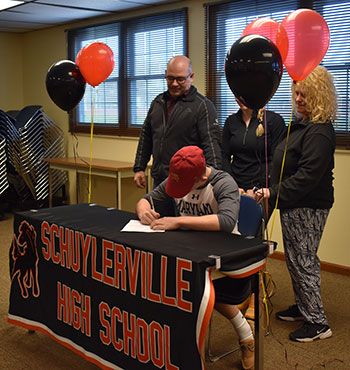 Schuylerville High School senior Orion Anderson signed his National Letter of Intent with the University of Maryland on Monday, April 23 to wrestle at the Division I level in the 2018-19 season. Anderson signed the letter in front of administrators, coaches, teammates, his family and the media.

“Maryland felt like a good fit,” Anderson said. “The coaches are great and it felt like the right place for me.”

Anderson is a three-time defending state champion and was named the Division II Athlete of the Year for wrestling. He was also a member of the varsity football team.

“Every match I went into this year I thought about this opportunity,” Anderson said. “It feels good to sign the paper and know where I’ll be wrestling next year.”