Home > District News > A Battle of the Books victory, five years in the making 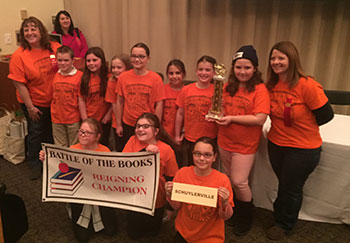 Nearly a dozen Schuylerville Elementary School fourth-graders are celebrating a victory, after their reading and memorization skills helped them take first place at the sixth annual Battle of the Books competition on Monday, March 13 at Skidmore College. While the joy of winning was evident on the faces of the students, the first-place finish meant much more than a trophy to librarian Maria Weeks.

“I started the club in 2012 with the hope of getting more students engaged in reading,” Weeks said. “To watch it grow to this magnitude has been incredible.”

In the five years since Weeks began the Schuylerville Battle of the Books club, it has grown tremendously. In 2012, she had just one team of 14 third grade students. This year, she had three teams, ranging from third to fifth grade, with nearly 40 students participating. It wasn’t until this year that a Schuylerville team has finished first.

“My goal has been to get more student involved every year and to get students to explore different books,” Weeks said.

Fourth-grader Hannah Citron says Battle of the Books has done just that. She says the club helped introduce her to books she never would have chosen herself.

“This year we had to read a book about the Barnum and Bailey Circus and I ended up really liking it,” Citron said. “Last year, there was a book we had to read for the competition that was the first in a series. I liked it so much that I’ve now read the entire series.”

Weeks says the drive and passion she has seen from the students has helped the club grow, despite a few obstacles along the way.

“It’s tough because the only time I can meet with the students is during their lunch break, so to get them focused in such a short amount of time requires a lot of dedication on their part,” Weeks said.

Drive and dedication are two skills necessary for this competition, which require each grade level to read 10 books, both fiction and non-fiction, to prepare for the “battle” consisting of 32 questions for a two-team battle and 48 questions for a three-team battle.

“We’ve learned a lot since 2012,” Weeks said. “I now begin the club earlier in the school year and I offer the students summary pages for them to fill out and online Quizlets to help them retain the information.”

As Weeks has grown the Schuylerville program, the entire Battle of the Books competition has grown along with it. A record 470 students on 61 teams competed this year.

“It’s a really fun experience,” said fourth-grader Abby Levin. “You get to compete against kids who love reading as much as we do.”

Weeks says in addition to improving their reading and memorization skills, the students have learned about sportsmanship and integrity. Weeks says that this year the fourth-grade team was given a repeat question in the semifinals. Instead of answering it correctly and winning, the team immediately notified the reader that they’ve had that question before.

“It’s never been about winning to me,” Weeks said. “It’s about bettering our students and this was the perfect example of that.”

Teamwork, leadership and having fun are some of the other focuses of the club.

“Battle of the Books has taught me perseverance,” said fourth-grader Olivia Crowley. “Sometimes I don’t like a book we’re reading, but I know I have to get through it so I don’t let my team down.”

“I feel like when you read it can spark a part of your imagination and you feel like you’re inside the book,” Levin said. “I just love it so much!”